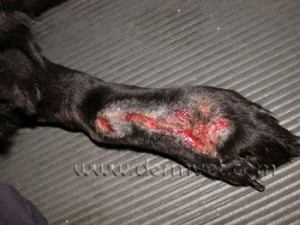 Transmission or Cause: The causes of acral lick granulomas include infections caused by bacteria, fungi, or mites; allergies, cancer, joint disease, or previous trauma; and an obsessive-compulsive disorder caused in some dogs by boredom. Dogs are incited by their condition to lick an area until they cause hair loss and erosion of the superficial skin layers. The consequence is further itching, which in turn results in more licking. This itch-lick cycle is exacerbated by the fact that damaged cells release endorphins, or brain chemicals, that are powerful analgesics. The licking may with time cause secondary infections, thickening of the skin, and changes in pigmentation.

Affected Animals: Acral lick granuloma may affect dogs of both sexes and all breeds; however, males or dogs that are older than five years are more often affected. Breeds disposed to this condition include the Great Dane, Doberman pinscher, Labrador retriever, golden retriever, German shepherd, and Irish setter.

Overview: A commonly seen skin disorder of dogs, acral lick granulomas are skin wounds that are worsened by a dog's constant licking of the affected area. Because the repeated licking hinders resolution of the lesion, dogs must be prevented from licking the acral granuloma until the wound has healed completely. Acral lick granulomas have a variety of possible causes. The disease is often bothersome to owners as well as their dogs. A veterinarian can implement appropriate medical therapies to treat the lick granuloma and to prevent recurrence.

Clinical Signs: Lick granulomas are skin wounds typically located on the distal area of the front leg or hind leg of a dog. Some dogs may have more than one lick granuloma at a time. These lesions usually appear as firm, raised, hairless areas of skin that may be hyperpigmented, or darkened with pigment, due to the dog's chronic licking of the area. The center of the lesion is usually ulcerated, red, and moist, or may be covered by a scab.

Description: An acral lick granuloma is a lesion, usually located on the distal part of one of the limbs of dogs, which is caused or worsened by the animal's obsessive licking of it. Damaged cells are believed to release pain-relieving endorphins that addict the dog to the licking and mutilation of the lesion. The possible causes of the itching and licking behavior include boredom, trauma, arthritis or other joint problems, allergies, and skin infection. Often it is difficult to ascertain whether the cause of the lick granuloma is due to an underlying condition or the dog's obsessive licking or a combination of both. Treatment is usually lengthy and often only minimally effective in chronic lesions. Early interventions have the best chance of success. Some animals will respond to medical therapy by maintaining a milder form of the lesion.

Diagnosis: Diagnosis of acral lick granuloma and its cause requires a thorough history and physical exam. The following tests may be performed in order to determine the underlying cause of skin lesions: cellular evaluation using a slide impression of the mass, biopsy, allergy testing, and x-rays. Underlying conditions of the lesions include joint disease, cancer, bacterial or fungal infection, demodex mite infection, previous trauma, allergy, and psychogenic licking.

Prognosis: Because acral lick granuloma is difficult to cure, veterinarians usually give it a guarded prognosis. Dogs that receive early treatment have a better prospect of recovery than dogs with chronic conditions.

Treatment: Treatment of acral lick granuloma requires addressing the suspected cause of the lesions. Bacterial infections, for example, are treated with antibiotics for weeks to months. Arthritis is treated with pain management and joint therapy. The obsessive-compulsive component of the disease is more difficult to treat. The dog may be prevented from licking the area by using some type of mechanical blocking device such as a collar, muzzle, or bandage. Oral antidepressant medications may be helpful. A topical product may be used to decrease the itchiness of the area and aid in the healing process. Severe cases may call for the injection of a corticosteroid into the lesion. If the lesion is small, it may be surgically removed, but recurrences are frequent. Radiation therapy has been tried in some cases, but its rate of success is poor. Laser surgery may be helpful in selected cases.

Prevention: There are few recommended measures for prevention. Dogs suffering from boredom or from the stress of being left alone for too long should be given a more stimulating and socially interactive environment.