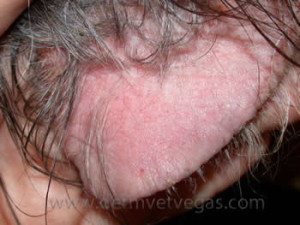 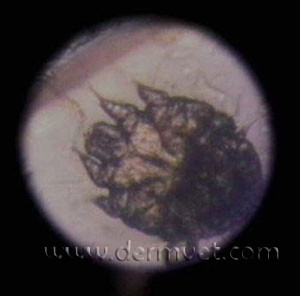 Transmission or Cause: Canine scabies is highly contagious. Transmission occurs through direct contact with a carrier animal, or when a mite falls off the skin of a carrier and survives in the environment long enough for it to infest a new host animal. At 50 - 59 F, mites can survive between four to 21 days in the environment without a host. At room temperature (68 - 77 F), mites can survive for two to six days.

Overview: Sarcoptic mange is one of the most uncomfortable skin diseases that a dog can contract. Highly contagious, sarcoptic mange is caused by a mite called Sarcoptes scabeie var. canis and is transmissible to humans. These mites burrow into a host animal's skin, causing scaling, yellowish crust, hair matting and loss, and severe itching.

Some dogs never develop the classic skin lesions, but will itch constantly year round. Often, animals with this condition will be misdiagnosed as having allergies. Diagnosis can be very difficult because the mites frequently are not found on skin scrapings. Thus, treatment frequently is based on the suspicion of scabies, rather than a definitive diagnosis.

Generally, topical dips are used for treatment. Injectable and oral medications are available, but certain breeds can have a fatal sensitivity to the medication. A veterinarian should be consulted about the proper course of treatment. The prognosis for sarcoptic mange is excellent with proper treatment. 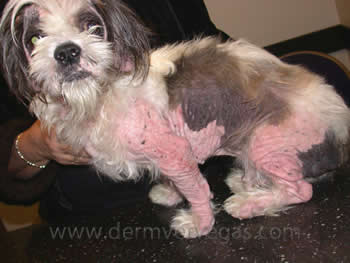 Symptoms: Severe, constant itching at any time of year is a classic symptom of sarcoptic mange. Areas with less hair, such as the earflaps, elbows, hocks, ventral abdomen, chest, and legs, are affected most commonly. The mites cause hair loss, a reddened rash, and yellowish crusts to form on the skin in affected areas. Typically the ear margins and elbows are affected most severely. The ear margins tend to have thickened, crusty material on the tips and yellow scales. The animal may develop a secondary skin infection and severe scratches from the trauma of constantly scratching. The lymph nodes also may swell as a result of mite related inflammation.

Description: Canine scabies is caused by a mite called Sarcoptes scabiei var. Canis. Although extremely small, these mites can cause severe itching and skin irritation that will decrease a dog's quality of life significantly. The female mites dig into the superficial layers of the skin to lay their eggs. Once the eggs hatch, the larvae migrate nearby and then dig deeper into the skin to mature into adults. This process causes severe inflammation, irritation, itching, and rashes. With a 21-day life cycle, the mites can replicate quickly, causing a rapid increase in numbers and more skin irritation over larger areas.

The mites can be passed to other animals, such as coyotes, foxes, and (transiently) humans. People who have acquired mites will develop itchy red bumps on their body. These lesions last for approximately two weeks, after which they usually disappear on their own. Repeated contact with the affected animal can cause the lesions to remain for long periods of time. A medical dermatologist should be consulted about any human skin lesions or questions about mites.

Diagnosis: A definitive diagnosis of sarcoptic mange is often difficult. Several skin scrapes typically are taken and then examined under a microscope. Unfortunately, it is often difficult to detect mites, especially if the animal has had mites for a long time or has had several recent baths or dips.

Other tests can be used to aid in a diagnosis, such as the pinnal-pedal reflex test. This test is given by rubbing the ear margin, or pinna, between the fingers and watching to see if the dog attempts to scratch the ear with its hind leg. If it does, then scabies is the presumptive diagnosis. Generally, if scabies is suspected, treatment should begin immediately. A prompt response to therapy, such as a decrease in itching, generally means the assumption of sarcoptic mange was correct.

Prognosis: With proper treatment and prevention, the prognosis for a cure is excellent.

Treatment: For dogs that have thick crusts or a thick hair coat, treatment begins by clipping the hair from the affected area. Then, an anti-seborrheic shampoo that breaks down and removes crusts, skin oil, and debris is applied. Next, a parasiticidal dip is applied to the entire body, including the face and ears. The dip should not be allowed to get into the eyes. The dip typically is used once a week for at least four to six weeks. The entire environment, including all animals and objects that have come into contact with a dog that has scabies, should be washed thoroughly and disinfected.

Other treatments involve the use of an injectable or oral medication called ivermectin. Although this medication is a highly effective and common treatment, this use is considered extra-label; it should NOT be used in breeds such as collies, Shetland sheepdogs, Old English sheepdogs, and any herding dogs or their crosses. Side effects can cause death.

The newest treatment for canine sarcoptic mange is selamectin, manufactured by Pfizer in the United States as Revolution. This topical parasiticide is effective in treating a number of different parasitic infestations in dogs and cats. For dogs with scabies, the treatment is applied topically, then repeated 2-4 weeks later.

All dogs that have come into contact with an affected animal need to be treated as well. A veterinarian should be consulted about the most appropriate treatment plan. People with suspicious lesions should consult a medical dermatologist for evaluation and treatment.

Prevention: The best way to prevent transmission is to avoid any contact with animals or the environment of any animal that may be carrying scabies. All boarding facilities, grooming equipment, and bedding materials should be washed thoroughly and disinfected on a regular basis.